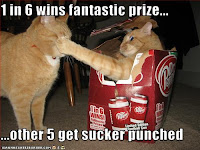 There's some wonderful give-aways going on around the m/m net and I just wanted to give you a heads-up on a few that I'm participating in.  Since I have two releases within days of each other I'll be giving away a copy of each here on my blog as well as in the give-aways I'm mentioning. That being said, you'll have a few chances to win both releases and if you don't win, well, you know the drill. <--shameless author begging.

The first one - just started today - is over at my bff's place, Babes in Boyland. The babes are giving away 22 books which includes the entire collection of Kiss Me Quick stories from Less Than Three Press. I've added my Love and Patience to the mix and there are some fabulous stories being given away. So click the pretty banner, hop on over there and give it a shot.

One week out of every year the angel Anael spends time in a remote cabin with the human he loves—a human who does not know his lover’s secret, who for the last five years has patiently waited for the day that one week might finally become one eternity ...

The fabulous Joyfully Jay is doing Rock Star Week February 5 - 11 and I'm included in that one too. Jay will be reviewing Outfoxed then I'll be giving away a copy of Gage and Rylan's short Valentine's story, Theme of Hearts (an Outfoxed prequel). Rock star stories are one of my favourite genres so that will be a fabulous week. Click the button, join the fun.

Gage Galeano's career is soaring: he has his best friend, lover, and bandmate by his side and Glitter Fox is everything they always wanted their band to be. Their latest concert was a success, and Gage is so high on life he can almost forget it's his least favorite day of the year. Almost.

But Gage’s plans to forget the day exists are scrapped when he’s enticed into a car by an usual word. Rylan Rivers knows that Gage hates the dual meaning of Valentine's Day, but he's determined to make this year’s dreaded day memorable in a very sexy way.

I've also thrown my hat (book) in Valentines' Day blog hop. There are 265 authors participating in that one but not all m/m - I believe it's predominantly het. I'll be offering up one copy of either Love & Patience or Theme of Hearts. That one runs from February 11-14 and I'll be giving you further details later.

The final thing I'll mention today - so your brains don't implode with all the goodness - is a blog hop that I'm organizing along with Erica Pike and N.J. Neilsen. Hop Against Homophobia will start on May 17 (International Day Against Homophobia) and run until May 20th. This blog hop will strictly be m/m authors and stories which is a definite bonus if you aren't into m/f and don't want to slog through too many blogs to find the boy on boy. :) I'll be posting more information on this later on but if you're an author and want to take part, shoot me an email at kleemoon66(@)gmaildotcom and I can get you the details. 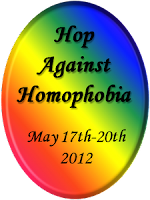