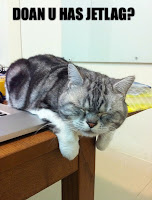 Greetings! I've missed you people. Hopefully I remember how to post again. :) I'm still jet lagged and on some weird half-Canadian-half-Eurpoean sleep schedule but I want to start stepping back into RL again.


Both my new releases are live - Yays! Countdown to Daddies has gotten some great stars and reviews and hopefully once a few people read Lucius' Bite I'll get those, too. Can only hope people like what you write, right? I think that's natural. The sequel to Lucius is already floating in bits and pieces in my head, just need to find some time to put them on the page.


I'm going to do a post on my trip - probably a couple of them since I feel so ADHD at the moment and my focus is worth crap. Hope you don't mind if I put up a couple buyers' links for my books - here they are:

June 22 is release day for Lucius' Bite: Family of Misfits from MLR Press. This is my first novel-length book and my first paranormal, and I'm more than a little nervous about how it will be received. I'm offering a give-away of an ebook copy so leave your name and email address and I'll randomly pick a winner. Contest runs from June 16 - 22 and if you tweet this link, I'll give you an additional entry.

I don't have the buyer's link yet but here's the MLR Press website link.

~~One bite has never been a life changing decision but it is now — to bite or not to bite that is the question.!!

All Lucius needs is his family. They might be a mismatched and unconventional group but they’re the only “real” family he knows and wants. What Lucius doesn’t need is the strange, beautiful man who arrives as a last minute dinner guest and knocks him and his wolf on his ass, literally.

Just being in the same room with the mysterious Nicu proves disastrous. Lucius knows without a doubt he doesn’t need the havoc Nicu threatens to bring to his predictable, but comfortable existence. But when he stands to lose the man who is tearing his life apart, Lucius realizes he doesn’t know what he needs at all.

Countdown to Daddies, my Father's Day release from MLR Press, goes live on June 15 so I'm having a little give-away contest for an ebook copy. Just leave your name and email address (comments are always nice, too) and I'll be randomly selecting the winner as soon as I can (taking into account the ship's internet). Contest will run from June 10-15 and if you tweet this link, I'll give you an extra entry. :)

I don't have the buyer's link yet but here's the MLR Press site in case you want to check it out.

~~Even gay dads have pregnancy pains~~

Matteo and Gabe have everything they could ever want out of life, except for a family all their own. When Gabe's twin sister offers to be their surrogate, it’s a dream come true until she insists they be completely involved in the pregnancy. The new dads quickly realize they may have bitten off more than they can chew.


Happy Father's Day to all those daddies out there. :)

I leave Tuesday for my cruise - we fly to London then bus it to Southampton and the ship leaves Wednesday. Twelve days exploring Northern Europe - Ireland, Scotland mostly, with a stop in Guernsey (don't they have cows there?), Liverpool and Paris. We have three nights in London after to explore as well.

I'm still one-crutching it - annoying but although my MCL and hamstrings are much better, my bursitis is coming back. I can't get another steroid shot until I get back so the pain is definitely more than it was even two weeks ago. I'll survive - rest when I have to, ice it and be careful (have I told you I'm a klutz?) Besides being crutch-challenged, I'm also going to be internet-challenged while I'm gone. I'm hoping to check up on email a few times at least but on the ship it costs an arm and a leg, of which I already only have one good one.