Flashback Fridays - One Hit Wonders of the 80s 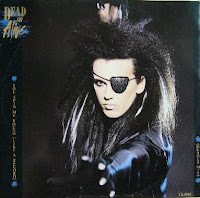 Flashback Fridays - One hit wonders of the 80s. You know there are a lot of them and when you hear the song you go "oh, I remember that - I loved that song" but generally you have no idea who the band who sang it is.

No a fave of mine to be honest but it has to be one of the most well-known one hit wonders.

It was a remake of a 1965 song and was released again by Marilyn Manson in 2001.
The video for Soft Cell's version is a little strange and had some controversy surrounding it because of the little girl in the video that the lead singer keeps pointing to. It was the 80's, people.

Yeah, I had to do it - couldn't resist. Not sure if anyone but Canadians know who Bob & Doug are (Rick Moranis and Dave Thomas from SCTV) and they probably gave other countries the wrong idea about Canadians in some way but they were damn funny. This isn't much of a song but Geddy Lee's voice is awesome as ever and the boys banter is great. So... take off, eh. (PS not really a video)

Finally a Canadian band. Glass Tiger had the boost of having Bryan Adams take an interest in them and play a small part in their this song - though in the video he's played by a rockin' kid. :) They did have other songs on the radio but this was their big one.

They were over-the-top glam and hair and make-up - just everything was over the top.
But I swear there isn't one person who doesn't know the song or seen the video.
Lead singer, Dee Snider, is still around and quite successful.

Filmed on a shoe-string budget just to get the video out, it's not that bad.
Pete Burn was a sexy guy who had the whole androgyny thing going before it was cool.


Another song I loved and one that even today when I was trying to think of it,
I could hear it in my head but couldn't remember the title or the artist.

A Christian rock band that did fairly well in their own right but this was their biggest hit.
I imagine it was the standard song for a lot of weddings that year. Sweet song.

Since both my 1987 and 1988 pics were a little out of my range, I've giving you Midnight Oil.
Awesome song from this Australian band.

I little different from all the others I've posted but it's definitely a classic.

A mix of rap, pop, rock and metal - this is an awesome song.
To me it's very Red Hot Chili Peppers-ish and lead singer Mike Patton even looks and has Anthony Kiedis' movements. They were a band that didn't take themselves too seriously but dammit, I can never remember the name of the song.