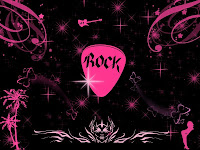 Flashback Friday Rocker chicks you say with a question mark in your mind? Has K-lee lost her own mind perhaps?

Not entirely but if you know me well, you also know I'm not a fan of woman singers or rock bands but today I'm going to share a few that I do like - back from the old days of course. :) There is a trend towards ballads for me and I know there's a lot more I could have included, maybe next time.


Stevie Nicks - the queen herself as far as I'm concerned.
She had the hair the clothes, the voice and the look
(plus the once-stunning Lindsey Buckingham).
I totally wanted to be Stevie Nicks.

Pat Benatar - "Hit Me With Your Best Shot" was more popular I think
but I couldn't find a good video for that one. (1983)

Lita Ford - I had to include Ozzy in this because I just love this song
and they both have awesome hair. (1988)

Berlin - definitely a feisty chick - you might also know the song
"You Take my Breath Away". (1984)

Concrete Blonde - not really sure of any of their other songs
but damn, I still love this one. (1990)