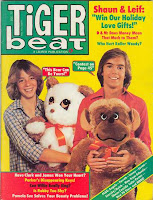 I thought for Flashback Friday, I'd go waaaay back this week. Back to the 70's to be more exact when I didn't listen to the pretty boys of hair metal (I was only in elementary school still) but the pretty boys of pop. :) (I have to admit these made me smile pretty hard and that's saying a lot for the couple weeks I've had)


The Partridge Family. I loved David Cassidy (now after seeing him in Celebrity Apprentice, he's kind of a pipsqueak jerk but I still have my memories) and yes, I was alive in 1970 but only for a few years - reruns people. :P One of my fave shows growing up and I just really wanted to become a Partridge.


Bay City Rollers, about 1975-1977 - lovely Scottish lads with their pretty tartan and sexy open shirts. Lol. (FYI, Eric the guitarist with the spiky hair to the right of Les, the singer, was my fave <3)


Shaun Cassidy 1977. He was actually hotter than David (half-brothers) and went on to play Joe Hardy in the Hardy Boys tv series (I read all the books way before then - always a Hardy Boys fan and not Nancy Drew - girls, yucky - not much has changed that way.) Shaun aged much better than David by the way.

Leif Garrett 1977. I'm sure there are an abundance of boys names Leif from these years. He's still around but mostly in rehab shows and things like that. :/ Such pretty hair.