Beautiful Zoolights and some health issues... 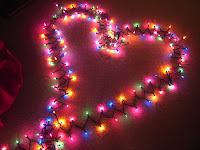 Lights are my favorite thing about Christmas. I like the decorations and music too, but the lights are definitely where it's at for me. Calgary has a thing called Zoolights every year where the whole zoo becomes a sparkly lighted paradise. There are all different kind of scenes and it's truly beautiful. I haven't been in a few years, probably since my kids were small, but I think this year I'd like to go. It's definitely very sappy to say but Christmas lights let some light into my soul and my heart especially when I'm feeling low. I'm posting a few pics of Zoolights (not mine). What's your favorite part of Christmas? 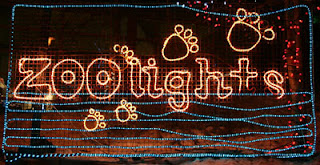 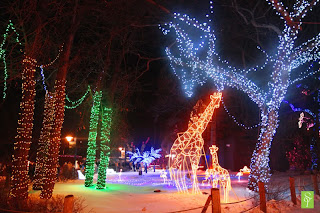 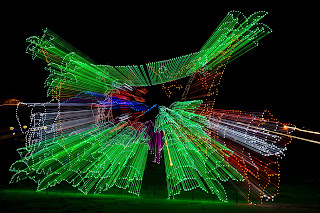 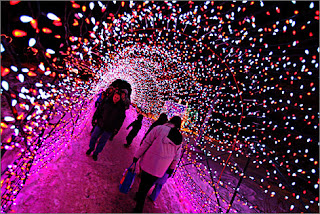 Pretty right? I'm also wanted to talk a bit about my doctor's appointment yesterday. Just need to get it off my chest, hope no one minds but I guess you can always skip this part of the post. It's no secret that I have clinical depression and was hospitalized twice this year - 6 weeks each - for medication changes. The medication I'd been on for over 5 years wasn't effective anymore - probably for over a year and half, and I left it too long to say anything to my doctor so I ended up trying to make the change at home but ended up in hospital anyhow. The first time didn't pan out and I was back in two weeks later for another change. That one took but with a few side effects that I was able to deal with anyhow. The only thing that didn't work its way out was the tiredness and despite switching times and things around, it just got worse. 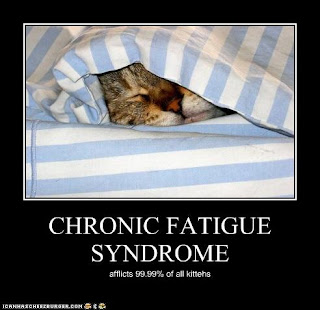 I had blood tests and was really hoping the problem was my iron levels - something easier to fix than other things, but it wasn't. My doctor and I talked about how I'd had Chronic Fatigue before I went on the med that helped me for so long, something I'd totally forgotten. She suggested going back on the original med since there was enough time in between to try it again and I agreed that would be the best course of action. The only problem is because she's my new doctor and doesn't even have any reports back from when I was in hospital, she wants my psychiatrist to do the changes since he knows me better. I can understand that but as much as I love my shrink and trust him (as far as I'm concerned he saved my life 7 years ago when he diagnosed me with Borderline), he's the hardest man to get ahold of and to track down. He's a great doc but more than a little scatterbrained and absent-minded. 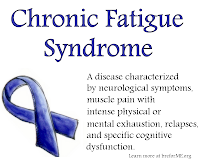 So now I have to wait and try to figure out if this is even something I want to try. The issue is the Chronic Fatigue will undoubtedly lead to the depression if left untreated because not being able to do things like 4 days a week breeds bad thoughts about myself, is really frustrating and yes, depressing. The other issue is whether the old drug will work again since it stopped working in the first place, or maybe it didn't even stop but my depression just became overwhelming. I liked the old med, it's the only one with an energy boost in it and I never had any side effects from it except possibly migraines but not sure about that one. Whether these two meds can be taken without a break is something I don't know yet and that may be a problem too since I don't do well with having nothing in my system, obviously if I did I wouldn't be on the doses I'm on. Hence that's why they usually hospitalize me to do it. Gonna try it at home but that'll take patience which I'm not so great at, non-judging of myself and giving myself a break while I adjust. 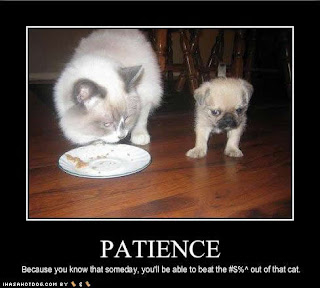 I guess my patience will be tested as I wait for my doc to call me back and then try to convince him that this is the thing that needs to be done for my overall state of sanity. My cholesterol results were pretty bad, my good cholesterol low and my bad cholesterol way too high. This is of concern even more so because of the early-onset stroke that runs in my family - my dad died of stroke at 32 and my uncle had one at about the same age - so what do you do for high cholesterol? You exercise and lose weight - 2 things that when you have major Chronic Fatigue are almost impossible to do - I do try but fail. The other option is more meds but my GP won't consider that until the other med changes are set and completed. So basically I'm in limbo as to what's going to go on and still exhausted as crap. I've also rebooked my sleep study for December because the first one was rejected (not a good thing to tell a Borderline) so will give that another try too. Maybe sorting out my horrible insomnia will helps things as well. All I really want to do is just write and enjoy the process and the fact that soon I'll be a published author but right now I can't even do that.

Enough of the babbling. Have a good day and rest of the week.