Depression and ponderance with a little light... 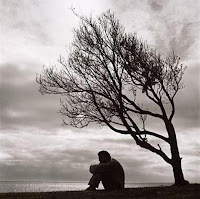 To people who know me, it's no big secret that the fall is a hard time for me. It's never been remedied or even reasoned why but it still keeps happening. I thought with my two 6 week hospitalizations this year for the depression that I'd get a pass for the fall but I was mistaken - of course. My therapist says it's not just the depression but the way in which the depression keeps coming back and the things that don't change during that time. The common factor is my home life and relationship with my husband but that is something unfortunately is not apt to change.

My intention for this blog was never to share my feelings but my writing and bright, happy, sexy pictures of beautiful men but that's sort of fallen by the wayside and I guess I need a place to express myself.  I'll take this blog off my writer profile on GR altogether so I don't have to appear as a whacko to someone who might be inclined to buy a book from me one day. I do have a website - well, not a real website - I have a domain and a place to put it but no actual format or anything. Not sure I ever will unfortunately since I'm so lame at things like that.

That's one thing I'm disallusioned with - my writing - I have my Christmas cowboys coming out on December 27 from MLR and now my really short YA coming out sometime after that but I feel like that's it for me. What did they call those bands back in the 80s and 90s that only had "one song that anyone liked" - one-hit wonders? Well, I think I'll be a two-book has-been. I see the things my friends write and the connections they have and I just find myself saying "what's the point"? There are so many excellent writers who have established critique groups and yeah, I'll say it... I'm jealous that some of my friends have that support and backing, a place where they can ask for feedback or help without feeling like a pest. I always feel like a pest, a burden, when I ask someone to read something for me and when I feel that way it just makes me back away from asking for help, makes me back away from my friends period.

And speaking of friends, that's a hard thing right now too. I have very few RL friends - and I like it that way - but the ones I have I cherish. My online friends are just as important but when my thoughts swirl in the fog of depression and unhappiness, my connections to those people become faded for me. I think I push friendships too hard, get too engrained and needy and stalkerish so my solution is to pull away and let those people go on with their lives without having to deal with me. It's hard on me but in my mind it's the only solution - to be alone, to hermitize myself, to not be an intrusion in lives that have their own issues. I love my friends and when they do me the honour of returning my friendship, I couldn't be happier but when I become too dwelly on myself, too over-needy and sad, they don't deserve to have to put up with me.

This blog is a bone of contention for me as well. I know you have to post something interesting to have people actually comment but when no one does, my mind goes straight to "they don't like me" or "I suck". That's typical me unfortunately. But saying that doesn't mean I'm vying for sympathy or attention, just letting whoever reads this into my head. That's another reason the writing may just not be my calling - that's the wrong word since I believe I've always needed to write and wanted to be a writer - maybe a better way to put it is I'm just not cut out for it. And maybe part of the disallusionment happened at Gay Rom Lit when I actually felt like I belonged somewhere that wasn't my own home and didn't involve being a mom. Maybe that feeling blinded me and now I'm seeing that it just wasn't true, that who I can be is not who I want to be. Too many questions and no answers. 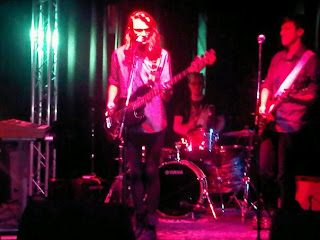 There was a shining light in my tunnel last night. My youngest, Jake, had a gig with his band Cluster Fox. It was the first time they'd really performed since they went from being City of Fiction to the new name and changed some members. The bar was a little run-down and there weren't a lot of people there - some for the first act and more for the last one, but we had our own little smatterings of fans. I love to watch him perform on stage because it's a totally different side to my quiet, non-competitive, thoughtful child. He plays his bass and sings with the same passion he puts into his art but more so I think. Always wanted my own little rock star so in that way, I'm a proud mama. (I know the pic sucks - lighting in places like that sucks and I didn't have my real camera with me - mom!fail.)

Anyhow have a good long weekend (for most of you) and I guess I'll see what next week brings.