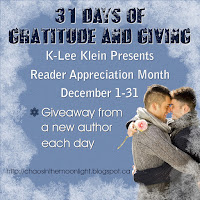 First of all, I am grateful for K-lee’s friendship! We were roommates at the inaugural Rainbow Con in 2014 and have been best buds ever since!  And I am grateful to her for hosting all of us this month.

One of the things I am most grateful for this year is the chance to be off work on Christmas Eve so we get to go home to my parents, in the small town I grew up in. I actually have the whole week off the work job, so I am looking forward to getting caught up on writing projects.

What’s your favorite Christmas tradition? Either now or when you were growing up? I’d love to hear. I’ll pick one winner from the comments below on December 19th to receive an eBook of your choice: A Place to Call Their Own, Disappear with Me, or my latest, Need Your Love. 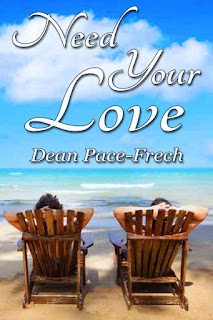 BTW…did you know my latest novel, Need Your Love is available? Check it out:

In June, 1966, ACLU attorney Eron Lassiter attends his uncle’s wedding, and makes an unsettling discovery. Though he’d bowed to family pressure and has a potential marriage planned, his long-ignored attraction to other men roars to life when Garrett Emerson, the bride’s nephew, captures his attention.

After serving in the Korean War and going to college later than his peers, upwardly mobile Garrett is a loan officer at a local bank. For his girlfriend, fiancé in her mind, he can’t climb fast enough. But none of that matters to Eron, and maybe that’s why Garrett’s so drawn to him.
Can Eron and Garrett find happiness amidst the still pervasive culture of propriety, honor, and expectation in the 1960s?

Bio:
With inspiration from historical tourism sites, the love of reading, and a desire to write a novel, Dean started crafting his debut novel, A Place to Call Their Own, in 2008. After four years of writing and polishing the manuscript, it was accepted and originally published 2013. His second novel, Disappear With Me, set in Edwardian England, was published later that same year. Both novels were re-released in May 2015.
Dean lives in Kansas City, Missouri, with his husband Thomas (legally as of February 14, 2015), and their two cats. They are involved in their church and enjoy watching movies, outdoor activities in the warmer weather, and spending time together with friends and family. In addition to writing, Dean’s hobbies include reading and patio gardening. 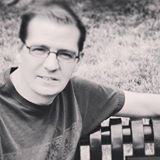