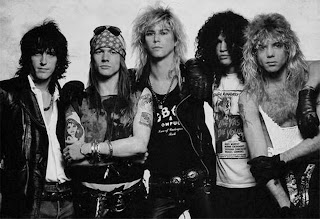 This weekend has been a mesh of side effects of a med increase, struggling at doing some writing and resurrecting the 80s/early90s chick in me. Guns N' Roses has helped me do the latter and despite the strangeness (stranger than normal) that became Axl Rose, I still love the band, the music, his awesome voice, his plaid shirts and his wiggly hips.
I'm also still crushing on Gilby Clarke again since I saw him on Rockstar Super Nova a few years back. ☺(sorry there's so big - the size down seemed so tiny :/)

Hope y'all are having a good weekend.

Sweet Child of Mine – no explanation needed – pure Axl and GNR.


Paradise City (another one most people know)

Patience (starring Axl's whistle and amazing hips) – I love when he slowed it down then brings it back up really fast. The man had amazing vocal range.

Don't Cry (another odd video but I love the rooftop setting and the other singer in the other plaid shirt on the roof is Shannon Hoon from Blind Melon who OD'ed a few years later – when I watched it after all these years, it still made me sad to see him. He was so full of energy and talent)

Knockin' on Heaven's Door – live version from Tokyo. I love this video. The intro is a little long if you don't like guitar solos but you can fast forward over that if you want. Axl in a long fringed coat and his undies with his little soldier pretty clearly displayed – jumping, dancing and singing is a definite must see if you're a fan. Lol. Despite his underwear, Slash's body was still the killer one in the vid. ☺

Change – acoustic version with no video but it's so beautiful and the picture matches how Shannon lived his life. He was a creative, talented, old soul 28 year old who was taken too soon. Beautiful but sad and ironic lyrics – take a listen. ☹

I don't feel the sun's comin' out today
It's staying in, it's gonna find another way, yeah, hey
As I sit here in this misery
I don't think I'll ever no long' seen the sun from here 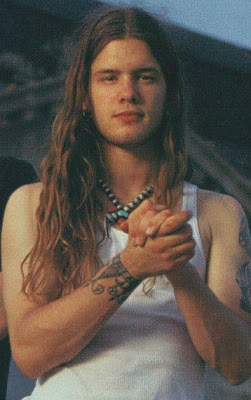 And, oh, as I fade away
They'll all look at me and say and they'll say
"Hey, look at him", I'll never live that way
And that's okay, they're just afraid to change

Ah, when you feel life ain't worth living
You've got to stand up and take a look around
You look up way to the sky
Hey and when your deepest thoughts are broken
Keep on dreaming boy, 'cause when you stop dreamin' it's time to die

And as we all play parts of tomorrow, oh, no, no
Some ways we'll work, in other ways we'll play, yeah, yeah
But I know we can't all stay here forever, oh
So I want to write my words on the face of today
And then they'll paint it up