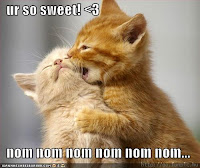 Fall has always been a hard time of year for me. There's never been a rhyme or reason as to why and believe me when I say, it's been researched and queried over and over. I have clinical depression - I'm not afraid to say it and I don't care who knows it - and there are two times of year that sink me lower than others: Fall (namely end of August to end of October) and the months of January and February (my birthday month lol). Strange timing and I'm thankful for the couple months between fall and January to sort of regroup


I managed to skip the fall hurdle last year, probably because I'd already been in hospital the better part of the year anyhow but this year its reared its ugly head full and fast in the past two weeks. I've been using the skills I've learned over the years - trying to get out of the house, keeping busy, not beating myself up (sort of) - but it's not working at this point. I even have something - 2 things actually - to look forward to in October; Yaoi-Con and GRL, but my head is still clouded with darkness. 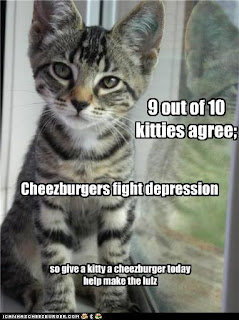 I went to the doctor yesterday and the conclusion was that my knee not getting better and the addition of the pain in my opposite foot, is not making the depression any better. (have I mentioned I don't like my doctor at all and DUH!) So we're going to try increasing my main medication from 300 to 450 which is a whole lot of upping but it's 150s are the only dosage the pills come in. I've always had good luck with this med, none of the side effects I usually have with others that leave me climbing the walls or comatose on the couch.

But... but there is a chance my anxiety will increase since this is a med that has an energy factor built right in - that's one of the reasons I love it. The anxiety thing will not be a treat if that's the case since fall makes me anxious enough but I'm hoping if it happens, it'll be short-lived and then I'll move beyond the dark cloud in my head. A person can only do so much crying until they think they'll melt into a puddle of their own tears, right? How poetic of me. :) <--- see - I am trying.

On to books. My concentration and attention span has been worth crap so I've been looking for shorter books that without a lot of angst, and not unlike the food cravings I have right now, I wanted some sweetness. Here are a few books that I'd strongly recommend if you're in the mood for sweetness. Hope you enjoy. 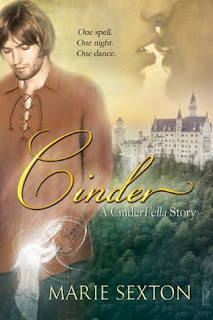 CINDER by Marie Sexton - Eldon Cinder would give anything to see Prince Xavier one last time, but only women are invited to the royal ball. When the local witch offers to make Eldon female for just one night, he agrees. One spell. One night. One dance. What could possibly go wrong.

~~This one has been on my Owned-to-be-read shelf ever since it came out but I just never got around to reading it. Well I finally did this week and it's so awesome. I love the sweet story and the characters and Cinderella has to be the greatest fairy tale to be slashed ever because it has so many possibilities. Just when I was sure I knew what was happening next, the author would switch things up and another element would be added to the story.

I loved Eldon. He was such a kind, gentle soul and the way he and Prince Xavier meet in the first place is such an adorable scenario. I think I just sat and looked at the last page, hoping more would just magically appear on the page because I just hadn't had my fill of the lovely couple. It didn't but I was just happy to have read about Eldon and Xavier and I'm sure I'll read their story again and again. 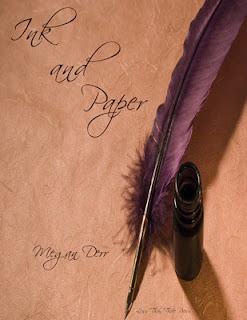 INK AND PAPER by Megan Derr - Enitan is a simple clerk in the stationary shop now owned by his stepfather. He spends his days cleaning and tending the inventory, wishing he could have have more of a presence in the shop, or leave to start his own somewhere else. Then a stranger walks into the shop, seeking ink, and Enitan finds himself swept into a world  to which he does not belong, and wishing for things even more impossible than a shop of his own.

~~In sticking to the Cinderella theme, this is also a version of the well-loved fairy tale and in Megan's beautiful style of vivid description, world-building and fabulous character development, it's a tale that touched me right away. In my eyes Enitan had already given up in the beginning of the story but as soon as the handsome stranger walks in, something inside him opens up again, something deep and needful and hopeful. When the man comes back and specifically asks for him, I could see the hope burning bright inside Enitan's whole body just from the description. He's a strong man despite his situation and the appalling circumstances that have been his life since his mother passed away and the man in question has not only the want and pure love to take care of him but to also change more than just Enitan's non-existent love life.

As always, I wanted more when the story ended - but then again I'm greedy that way. And if you haven't discovered Megan's other works, please take a step and do so. The knowledge and flair she has for writing both fantasy and historical are truly gifts I wished I possessed. Plus, I love her rockstars, too, even though she doesn't think they're as awesome as I do. (Personal note - And speaking of rockstars, I have this weird Cinderella rockstar story floating around in my head and since I've always wanted to write a fairy tale, I hope it sticks around long enough for me to do so) 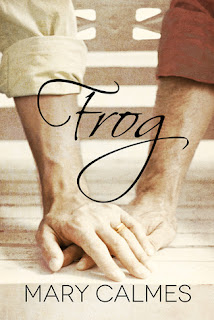 FROG by Mary Calmes - Weber Yates's dreams of stardom are about to be reduced to a ranch hand's job in Texas, and his one relationship is with a guy so far out of his league he might as well be on the moon. Or at least in San Francisco, where Weber stops to see him one last time before settling down to the humble, lonely life he figures a frog like him has coming. Cyrus Benning is a successful neurosurgeon, so details are never lost on him. He spotted the prince in a broken-down bull rider's clothing from day one. But watching Weber walk out on him keeps getting harder, and he's not sure how much more his heart can take.
Now Cyrus has one last chance to prove to Weber that it's not Weber's job that makes him Cyrus's perfect man, it's Weber himself. With the help of his sister's newly broken family, he's ready to show Weber that the home the man's been searching for has always been right there, with him. Cyrus might have laid down an ultimatum once, but now it's turned into a vow-he's never going to let Weber out of his life again.

~~I'm not sure if this was meant to be classified as a fairy tale retold but with the prince and frog references, there was no way I couldn't go there. Weber is one of the sweetest, most gentle characters ever despite the tough, rodeo cowboy shell he carries around like a badge of honour - or more than likely, to keep emotions from touching him. I loved how comfortable he was in any and every situation and how he wasn't afraid to show Cyrus his true feelings despite still insisting they couldn't make their relationship work. This was a sweet story all the way around - cute kids, a supportive family, and two men who only had eyes for each other and the best intentions at heart.

I know there are a ton of sweet stories out there and I have read some more but these are three I read this week and loved. Does anyone have any sweet recs or fairy tale retellings that are faves of yours? I'd love to hear about some of them. :) 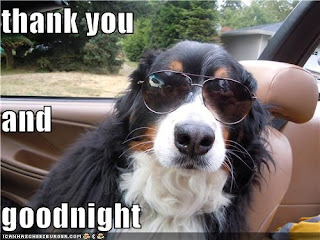 And one last thing - there have been some speculations lately about whether readers want to know personal details about authors and I've pondered it myself. My answer is that the writer I am is massively inspired by the emotions I have on a day-to-day basis and since I've never been one to stifle those emotions - and in general, don't know how - I share what how I feel and what's going on in my life because it's important to what and how I write. For me it's personal preference and everyone has a right to their own, as well as a right to read or not read what I might spout out about - lol say that three times fast - myself. I thank you for being interested in me as a person but certainly don't expect you to be.

I can't leave without some pretty which I've been trying not to post - pictures in general - and have been failing greatly in my attempt. 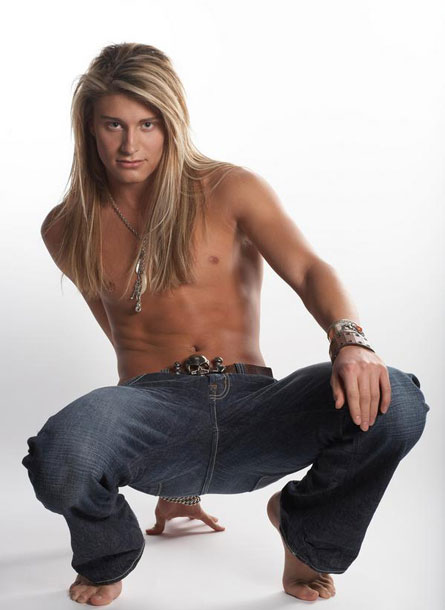 Oh, Wil. I really need to write something using your body, hair and face. *sighs* 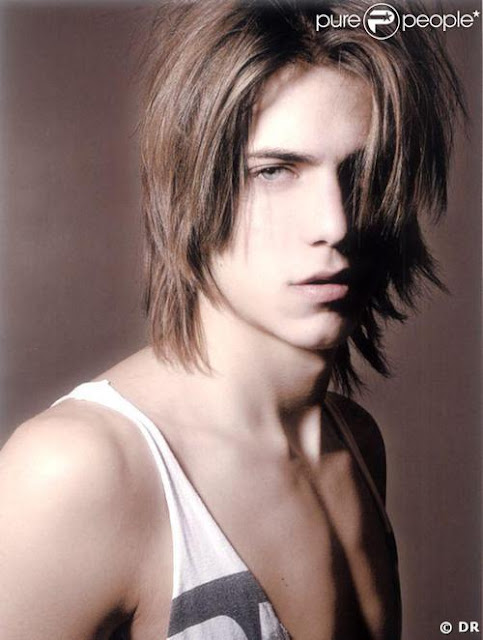 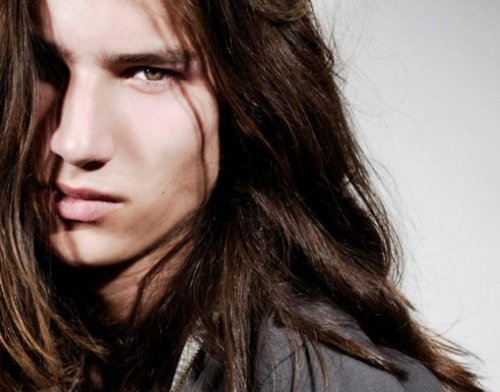 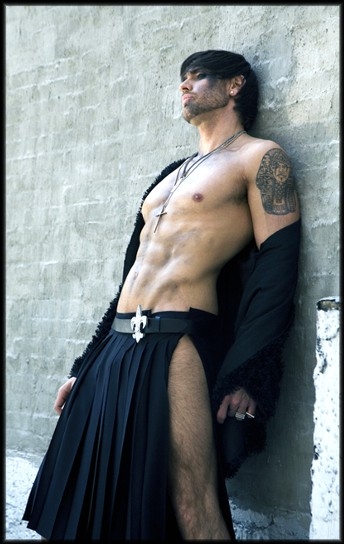