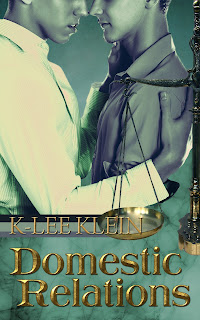 Domestic Relations comes out on Wednesday, September 5 so here's your chance to win an ebook copy the day it releases.

I'll be doing a random draw next Friday (September 5) so just leave your name and email address (a comment would be nice, too) to be entered.

Life has thrown a lot at Riley, most of it bad. But Riley is nothing if not stubborn, and though it left scars, he's managed to overcome the worst parts of his life. Not all of his problems are gone, but life is certainly better than it's ever been. Most of his strength and happiness is due to his boyfriend Josh, the best thing that life has given him, and Riley will do anything to keep him at his side.

But when past and present collide, and the problems become too much for Riley to contain or control, Josh is the very thing he stands most to lose ...

"Your Honor, my esteemed colleague is completely out of order!"

"I decide who's out of order in my courtroom, Mr. Devon, and at the moment I suggest you sit down and refrain from any further outbursts." The judge's voice rang through the courtroom, hushing the titter of whispers from the gallery.

Josh Devon threaded a hand through his blond curls, brown eyes glowering as he shot his colleague a look of pure contempt. "But, Your Honor, I clearly must object to Mr. Callahan's abrasive view that my client is homophobic. This case has nothing to do with being gay and everything to do with the complainant's lack of restraint when it comes to public affection in the office."

"Kissing your lover goodbye at the door of the building is lack of restraint?" Riley Callahan said. He snuck a peek at Devon before rolling his eyes and turning back to the judge. "Unless my colleague is aware of some archaic statute regarding public affection, I believe he is the one out of order."

"It is clearly a lack of restraint when there is tongue involved and you are employed for a company supplying religious and missionary supplies to third-world countries. And you know how the saying goes, Judge:  'A slip of tongue at the door only leads to a slip of penis in the office.'"

"Oh, please, Your Honor. That isn't even a real expression. What Mr. Devon is actually stating is that my client works for a right-wing bigot who finds it perfectly acceptable for a man to kiss his wife goodbye, but not his boyfriend."

"That's bullshit, and you… my colleague knows it, Your Honor."

"Language, Mr. Devon. You've been warned once. I won't tolerate it again."

"You heard Judge Morrison, Devon. Sit down and take your punishment like a man." Callahan smirked, blue eyes shifting momentarily to Devon before dipping back down to peer at his notes.

"My apologies to the Court, Your Honor. I don't know what came over me." Callahan forced his smirk into a look of concern and straightened his tie in a show of respect.

"Lying bastard," Devon hissed, narrowing his eyes as he glared to the side at Callahan.

The judge thumped his gavel on the desk, the resounding bang shattering the now silent courtroom. "Mr. Devon. One more outburst and I shall surely find you in contempt."

"I humbly apologize for my colleague's obvious attempt to delay the proceedings," Callahan said.

"Don't apologize for me, Callahan. If your client wasn't such a goddamn liar and drama queen, I wouldn't be required to make any outbursts at all."

"That, Mr. Devon, is the proverbial straw that broke the camel's back. Bailiff, please remove Mr. Devon from the courtroom."

"But, Your Honor …" Devon protested.

"Perhaps a few hours in a cell will remind you to use your manners and quiet voice in my courtroom, Mr. Devon. Court is recessed until tomorrow."