I'm a little slow with my winners so I decided to increase the odds and give away three of my ebooks. Congrats to *drum roll*

I'll be sending out emails to all three of you lovely people so you can tell me your preference in book and format. Thanks to everyone for stopping by during the Rainbow Book Reviews Blog Hop and I really hope if you liked what you've seen on my blog that you'll drop by again. :)

Writing update - I submitted my story for the Kiss Me at Midnight collection at Less Than Three and it was accepted - yays! The image below isn't the cover since each story will have their own but I just think it's really pretty. :) I expect those stories will be released at the end of December or around that time. As for more of LT3, I just did the last edits for the P.I. & the Rockstar for their Private Dicks anthology so now onto proofing and galleys. It sounds like it's going to be an awesome anthology - can't wait to see everyone's contributions. 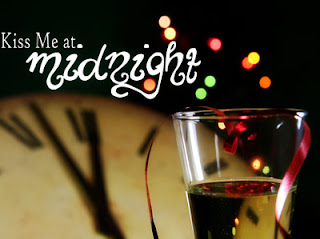 My next project - the sequel to Countdown to Daddies for MLR's Ho Ho Ho collection - is almost done and ready for betaing. Matteo and Gabe (mostly Matteo this time) have not been cooperating so I'm gradually whipping them into shape. And yes, there will be cute babies and hopefully a cute cover to match. :)

Next on the agenda is Ali's story from the Family of Misfits series. He's foaming at the mouth (God, I hope not literally) to get his say and he's already been filling my head with how he thinks things should go. ^_^ Wonder if he'll find and accept his spirit mate just as Lucius and Nicu did? Smooth sailing perhaps? Not likely when it comes to my strong-willed white witch. <3

And speaking of Ali and his family, the lovely L.C. Chase has been helping me make collector/trading cards for GRL of my Misfits - I have four lovely boys to go with the names now and I can't wait to share them with you. By the way, for those not going to GRL I'm going to run a contest closer to the date for a print copy of Lucius' Bite and some swag. :)

In other news - I have a short story called An Olympic Goal coming out in the Going For Gold anthology from MLR Press this Friday. This is my Olympic soccer (European football) story. There's no buyer's link yet but it's on GoodReads here --> Going for Gold.

The Olympic Games bring countries and people together in a long tradition of competition. But that can too often mean competition between friends, family, and lovers. Sebastian and Fernando have been together for over a year—professionally and personally—but now must compete on opposing teams in the rough and tumble game of soccer.
When an injury occurs on the pitch, one of them questions whether footballers first, lovers second is really the motto he wants to live by. Matches come and go but maybe what matters is what’s left when the game is over.
~*~*~

And finally, I'll be doing a giveaway for my upcoming novel Domestic Relations from Less Than Three Press. The official release date is September 5 and I'll have the contest up and running by tomorrow so make sure you stop by. :)

Life has thrown a lot at Riley, most of it bad. But Riley is nothing if not stubborn, and though it left scars, he's managed to overcome the worst parts of his life ... mostly. Not all of his problems are gone, but life is certainly better than it's ever been. Most of his strength and happiness is due to his boyfriend Josh, the best thing that life has given him, and Riley will do anything to keep him at his side.

But when past and present collide, and the problems become too much for Riley to contain or control, Josh is the very thing he stands most to lose ...