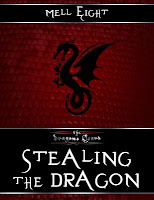 I'm pleased to welcome fellow Less Than Three Press author, Mell Eight, as she makes a stop on my blog during her "Stealing the Dragon" blog tour.  She's doing a giveaway on her blog, all information posted at the bottom of this page. Enjoy.

Dragons have been a fascination of mine for a very long time.  It has always enthralled me that the same mythos crossed the globe and then became unique to each culture and society the dragons encountered.  I've researched and learned as much as I could and that time and effort has gone directly into every dragon I've ever written about.  The dragons in my Dragon's Hoard Series are a combination of many different types of dragons from across the world.  I tried my hardest as an author to make my dragons unique while still honoring the history and power that generations before me have put into the dragons of myth.

I've always found the European dragon to be a series of paradoxes.  Fierce and violent, these dragons were always portrayed as huge, lizard-like creatures flying through the sky and lighting up the air with brilliant blasts of fire.  These dragons were also depicted as fiercely protective despite their destructive nature.  They collected treasure and land and hoarded what they possessed despite the knights and princesses who constantly disturbed them.  St. George the Dragon Slayer was known to have fought and prevailed over a marauding dragon, just as Smaug caused extreme strife for the dwarves of Tolkien's brilliance by coveting treasure and gold.

There are dozens of other dragon myths that I don't have the space to list here.  The dragons living closest to home are the feathered serpents belonging to the South American legends about the god Quetzalcoatl and one day I would love to write about them.  The dragons in my Dragon's Hoard Series are mostly a combination of the European and Asian versions.  My dragons have scales and large wings, they breathe fire and they hoard gems, and they are very protective of the things most important to them. At the same time, they safeguard the people they have taken responsibility over with equal intensity and are treated with respect for their power in return. 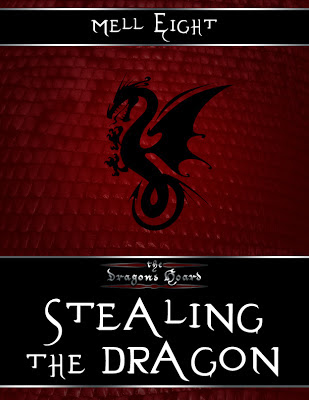 Stealing the Dragon is the newest book in the series and Tori, the dragon who this story revolves around, is as far from violent as any European style dragon could be.  Nyle, from Finding the Wolf, was naïve and innocent, but he still had an edge to him.  He fought for Leon and against the magi as best as he was able.  Tori doesn't even have that edge.  Instead he has an exuberance and love of life that stands out among the rest of his dragon family.  The humans respect Nyle, but he is also greatly feared, as are the other dragons.  Tori, on the other hand, is loved and cared for by everyone he encounters.  It defines who he is and how he reacts to the events surrounding him.  Here is one of my favorite Tori moments from Stealing the Dragon:

Jerney looked down at what An'tatori was holding and gasped. It was a silver necklace with a delicate blue teardrop topaz hanging suspended in an intricate silver net. The topaz itself was such a clear light blue color that Jerney could see An'tatori's hand through the stone. It was beautiful.

"I can't accept this," Jerney said with a shake of his head. "It's beautiful, but I don't want to take a part of your hoard."

An'tatori held up the gem near Jerney's face. "It matches your eyes," the dragon said softly. "I want you to have it because I want you to be my friend."

"Your friend?" Jerney asked, incredulous. An'tatori wanted to be his friend after his spells had allowed for the hatching gem to be stolen? Jerney was a thief and a witch, which wasn't exactly friend material for a baby dragon.

Jerney swallowed at the casual reminder that lovers Dragon Lord An'nanyle and Prince Leon were related to An'tatori. He thought An'tatori's logic was a bit off, but he was insistent.

"My name is Tori and I want you to be my friend," An'tatori said firmly, holding the necklace out again.

"My name is Jerney," he said softly as he reached out and took the necklace from Tori, "and I would be honored to be your friend."

"Good," Tori said with a happy smile. "Now put the spells on that necklace so you won't lose it!" Tori grabbed Jerney's hands and led him over to his bed. Jerney sat down across from Tori and set the necklace onto the blanket in front of them.

Tori was watching the necklace intently, one hand still clutching the ruby gem around his neck, as Jerney studied how serious the dragon really was. There was no indication that Tori was at all upset about how the night had gone—the tear tracks had all vanished from his cheeks and his gold eyes glinted with a child-like excitement that reminded Jerney again of his siblings when they were young and had found some new and exciting toy.

Jerney reminded himself that children could be fickle. There was every possibility that in a few days Tori would be at his door asking for the necklace back. But at that moment, Tori wanted his new friend to have it, so Jerney would oblige Tori for as long as the excitement would last.

Jerney prepared the spells in his mind, envisioning clearly the potion ingredients and the steps to brew it. Once he had a picture of the bottled potion in his mind, he lifted his hand and passed it over the necklace. A glance up at the dragon showed that Tori was biting his lip and wiggling in place in excitement, so Jerney added some sparkle and a flash of light to his spell.

The dragon jumped and giggled before reaching out to touch the necklace. "No one will steal it from you now?" he asked as he pushed the necklace towards Jerney.

"No one," Jerney affirmed. He picked the necklace up and clasped it around his neck. It settled there comfortably, with the teardrop landing just below the hollow of his throat.

"Good," Tori said with a nod. Tori yawned and shook his head. "We'll have to play more later," he said as Jerney got up off his bed.

Stealing the Dragon arrived in stores on February 6th, so if you want to read more about my dragons and about Tori in particular, here is where you can buy the book:

I am also hosting a free giveaway to celebrate the release of Stealing the Dragon.  All the information is posted on my blog:
Mell Eight Blog
Please enter and tell me about your favorite dragon!

If you want to know more about the Dragon's Hoard Series—Stealing the Dragon or the upcoming fourth book in the series, Melting the Ice Witch—or about any of my other works please check out my website:
Website

Thank you so much to K-Lee Klein and to dragon lovers everywhere for giving me this opportunity to show you my hard work.  I hope you enjoy Stealing the Dragon and The Dragon's Hoard!
Sincerely,

Email ThisBlogThis!Share to TwitterShare to FacebookShare to Pinterest
Labels: blog tour, other authors