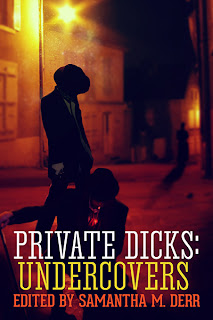 It's release day!!! Okay, so I'm a couple days late but I did know when it went live even if I didn't advertise it. Lol. Well, I probably did on twitter and facebook but this poor blog always gets last dibs.

I also swear I will get my GRL thoughts blogged soon - still a little overwhelmed at getting home and settling back into life. Need to get my pink wipe-off board back into use so I can can myself organized since right now I'm flailing around like a chicken with my head cut off.

I will pick the winner in the "Not Going to GRL" contest next week since I have to wait for my lovely friends to ship my books and leftover swag from GRL. Soon, my people, soon.

But anyhow - the PRIVATE DICKS: UNDERCOVERS anthology featuring my story "The P.I. & the Rockstar" is finally out. I've seen the rough version of the print copy too, and it's fabulous.

I have to pimp my own story first - is that politically incorrect? :P I have a special bond with these characters and they will appear again in their own full-length story eventually. Anyhow, I hope you enjoy Mason and Jade as much as I do. :)

The PI and the Rockstar by K-lee Klein— Mason is a detective. He’s not flashy or hip and he doesn’t have an office conducive to entertaining wealthy clients. But when made-of-money Durango and his gum-snapping daughter hire him to do surveillance on a popular rockstar named Jade Jonathan Lee, Mason’s business world collides with his personal life, and the result is a mystery that must be solved.


There's some fabulous authors and stories in this anthology and you just have to check them out.

Temper by Siobhan Crosslin—Reese hates deception, but that's all his life has been since he was sent to investigate a wolf pack on clashing sets of orders. Keeping his lies separated is all that's keeping him alive, and it's a job that grows harder by the day—especially with the unexpected complications of the alpha he's investigating.

Glamour by Holly Rinna-White—When his little brother is kidnapped, Jason hires Eric, PI and long-time crush, to find him, terrified of what will happen if people learn his brother is unregistered psychic. But when Jason is kidnapped as well, he learns he and his brother are not the only ones keeping secrets.

The Virginia Gentleman by Alison Bailey—When the Virginia Gentleman rides into town, it's a sure bet that trouble ain't far behind. He's quick on the draw, feared by all, and one sad little group of train robbers is about to find out why it's never wise to bet on trouble.

The Royal Inquisitor by Megan Derr—Esmour is one the best Inquisitor's in the kingdom, but the penance bracelets on his wrist serve as constant reminder that once he was not a master of deception, but a victim. To solve his latest case, he must work alongside the liar who changed his life, and the love he learned too late was never real.

Regarding the Detective's Companion by E.E. Ottoman—Jamie is desperate: he has no money, rent is coming due, and if he does do something soon he'll be forced back into a life of charity and pity. So when he is brought a case, Jamie takes it—even if it will mean lying to his client, manipulating the suspect and propelling himself into the middle of a plot involving murder and political intrigue.

The Demon Bride by Isabella Carter—One dead body left at the door is more than enough, but after three are left on the stoop of his father's agency and no one else is willing to investigate, Quinton decides he'll just have to solve the mystery himself.

Too Dangerous by Sasha L. Miller—Shi is good at what he does, no matter what his stupid ex thought. Danger comes with the territory, especially when that territory includes a special license to do select work for the government. But when the government needs him to fix something that defeated even their most elite, Shi learns that some situations are too much even for him.

One last thing - I have to show-off my beautiful tattoo. It's two week birthday is today and it's still healing and peeling a little. You'll also get the story of my awesome tattoo artist and the almost five hours I spent with him at a later date - along with some pics of the actual process. :) Please excuse the quality of the picture, especially the glare, little bit of blurring, lines from sleeping and weird positioning. Lol. It's hard to get a good pic but I assure you, it's beautiful and totally exceeded my expectations. :)