Why Bert and Ernie should get married... (not mine) 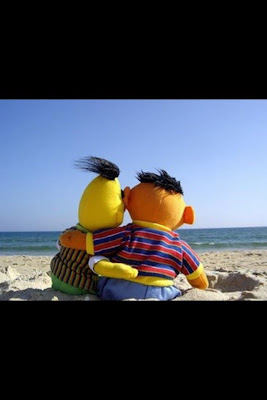 Why Bert and Ernie Should Get Married
by Erin Sherbert

It's about time someone pushed gay marriage on television's gayest couple -- Bert and Ernie. Even if you are a gay-hating, Christian-loving Republican, it's hard not to get a warm and fuzzy feeling when you see the "roommates" together on television.

But those two have been stuffed away in the closet for too long -- and people are ready for them to come out. Change.org has started a petition, asking PBS to allow the popular Sesame Street pals to call it like it is and get gay married.

So far 700 people -- and counting -- have signed onto the petition. And for those who still have their doubts that the homosexual puppets should get married, we offer our reasons to consider also scrawling your name in favor of this union. 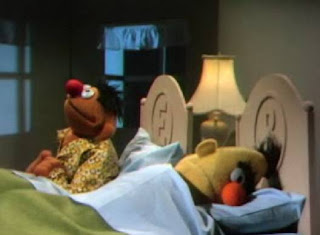 5. The "W" Club: Bert has that freaky fetish with the letter "W" -- he's even the president of the National Association of W Lovers -- a group of Muppets who just can't get enough of the letter. And we can safely conclude that the word "wedding" wouldn't be the same without a "W."
​
4. Bert can dump his make-believe girlfriend: Every closeted gay couple knows the best way to beat back suspicion is to publicly announce one, or both of you, have partnered up with the opposite sex. Bert has fooled kids for decades, using a nameless woman as his beard. He even wrote a song about her titled "I want to hold your ear." Although it's not that convincing -- if Bert is really having sex with this woman, wouldn't he want to hold so many other things besides her ear? 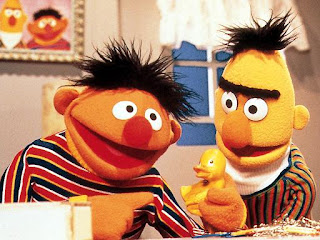 3. Ernie's rubber duckie will no longer be a euphemism: We all know how much Ernie likes his tubby time, and it's even better with his "special friend," rubber duckie. But c'mon: How much time do you think Ernie really spends squeezing and fondling that damn duck? That's only what they show on TV. If PBS would just allow Ernie to marry Bert, then we could finally watch them have tubby time together.

2. They're clearly in Love: While PBS and other self-loathing people everywhere will claim that these two grown men have a platonic relationship, we're not buying this crap that they are just roommates. I mean how many male "roommates" have a photo like the one above hanging in their shared space? 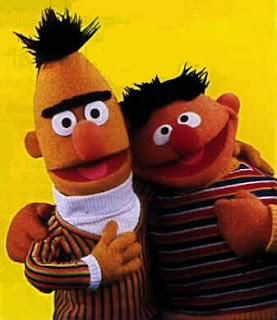 1. Dumb it down for Republicans: Gay marriage is a very, very difficult concept for Republicans to grasp, no matter how many times you explain it to them. But think about how much Sesame Street has already taught us about the basics. We've learned so much about spelling, reading, writing, and even counting. If we let Bert and Ernie tie the knot and show it live on the popular kids' show, then maybe, just maybe, the concept would be simplified just enough that both kindergartners and Republicans could understand.