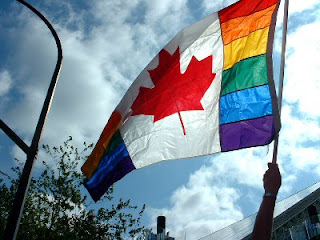 
Six years isn't typically a milestone anniversary; those things tend to be divisible by five. But I started thinking about it after spending last weekend reading A Radiant Life, a collection of columns by Nuala O'Faolain, the late Irish journalist.

O'Faolain can be heavy slogging. Not for her writing, which is piercing and luminous, but because she paints a moving, if relentless portrait of a grim, grey Ireland, the Irish green all washed out of it, an alcohol-sodden place of domestic violence, abused children and oppressed, under-valued women. Indeed, one review of her book online was headlined "Emerald Bile."

But it was her column on the progress, or lack thereof, of acceptance of same-sex relationships in Ireland that made me think of Canada's upcoming anniversary.

In the run-up to Bill C-38 being passed, the naysayers darkly predicted the seismic crumbling of Canadian society as we know it; they said the "gay agenda" would undermine heterosexual marriage and families.

They predicted that in this new anything-goes Canada which would be created if Paul Martin's government sanctioned gay marriage, people would be marrying their cats, pedophiles would be marrying children, priests would be forced against their religious beliefs to officiate at gay marriages, and on and on. Each imagined scenario was more dire and ridiculous than the last. Oh, and polygamy would be the next step down the proverbial slippery slope to that inky abyss of promiscuity and immorality where everyone would be frolicking.

None of it has happened. Even polygamy is still in the same dreary holding pattern in Bountiful, B.C.

Earlier this week when I opened my front door to get the newspaper, I found the neighbour's tabby cat sitting on my porch, looking up at me and meowing. I don't think it was a marriage proposal.

But maybe that kitty is already to married to some other human. I mean, it's quite possible that Canada fell apart while none of us was watching. So let's look at the statistics, courtesy of the Ottawa-based Institute of Marriage and Family Canada, which updated them as of last Nov. 15, and see if we have indeed gone to hell in a handbasket.

"While divorce rates have increased greatly since the introduction of Divorce Laws in 1968, actual divorce rates have been decreasing in Canada since the 1990s. The 50 per cent (failure rate) fallacy is false . . . In Nova Scotia, Ontario, British Columbia, the Yukon and Nunavut, the total number of new divorce cases has declined six per cent over the four-year period ending in 2008/2009," says an IMF news release.

Indeed, while divorces per 100,000 population reached 362.3 in 1987, they were down to 220.7 per 100,000 in 2005, the year same-sex marriage became law. So much for the myth that same-sex marriage would aid the dissolution of straight marriages. They dissolve quite nicely on their own, thanks to their internal dynamics, such as domestic violence, alcoholism, gambling and infidelity. These figures, by the way, come from such eminent sources as the Vanier Institute of the Family and Statistics Canada.

Indeed, a November 2009 report entitled Divorce: Facts, Causes and Consequences, by Anne-Marie Ambert of York University in Toronto, found that "divorce rates have gone down substantially during the 1990s and have remained at a lower level since 1997, with minor yearly fluctuations."

A year after Bill C-38 became law, when Parliament was gearing up to hold a free vote on whether to revisit the same-sex marriage issue, Charles McVety, president of the Family Action Coalition, complained to CBC that the bill had passed without proper study. "Why don't we simply study the impact of this on the age-old institution of marriage?" he asked.

Study completed, Mr. McVety. It hasn't had any impact at all. Nobody talks about it anymore. I haven't even heard that odious phrase "gay agenda" in years. I guess there wasn't one.

Nor has gay marriage undermined straight marriage, though how that undermining was supposed to play out is still unclear.

So despite the passage of Bill C-38, the sun has continued to come up each morning. Nobody has married their cat, their tree or their favourite living room chair. No priest has been forced to marry same-sex couples. No pedophiles have married children. I've long been a supporter of same-sex marriage, and I got married, too, just last fall — to a man.

Email ThisBlogThis!Share to TwitterShare to FacebookShare to Pinterest
Labels: marriage