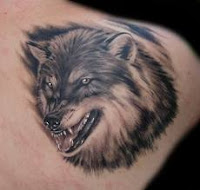 <-- That right there is a tattoo I really want - maybe with some background added in. I've always loved wolves and it sort of resembles my dog's face that I lost last year.


And in other tattoo news, I'm looking to turn my simple Red Hot Chili Peppers logo tattoo into a mandala tattoo. Basically a mandala can have certain symbolism behind it, there are celtic, chakra, etc. or it can just be things woven together that represent parts of a person. I want to work outward from my Peppers tattoo, maybe fill in the middle with another layer of the logo. My problem is I cannot draw or design to save my life and I'm hoping someone might be willing to offer me some assistance. I know I have some artistic friends out there. Thoughts? Anyhow - on to the next part of the blog.


I'm thrilled to say that my shifter/witch/gypsy/etc paranormal series - at least the first book - has been accepted for publication by MLR Press. I've been working hard on Lucius' Bite and it's my longest story to date (not counting that 90k one I started three years ago and haven't been back to :P).


I spent last week re-reading it, revising it, editing it until I never wanted to see the characters again - Lucius who? But it paid off and now I've already gotten through the first set of edits so it's on its way. I fall in love fast with my characters and both the MCs drove me freaking crazy at different times during different scenes but I love them so hard. I don't have a publication date yet, of course, but hopefully in time for GRL.


AND it will be in print too. That kind of makes me squee inside -even though people don't buy a lot of print anymore, especially m/m - it's more about having my name on a cover of something I can hold in my hand. :)  And speaking of covers, I may be having a friend do one but it's still too early to tell. I'll keep you posted.


Now here's an excerpt: (it's a more humorous one but the story is still a mix of angst with some light-heartedness once and a while) Hope you like.


‘They’re dirty and smelly.  I can't believe you invited them for Yule dinner."

"I've already warned you more than once, Lucius. We’re part of the human world not the other way around so get over yourself! Another word about it and you’ll live to regret it."

Lucius Moretti huffed out a breath, snorted and smirked while he searched his brain for one more retort. He knew Ali wouldn’t do anything drastic to him anyhow. He was Ali’s Luscious Lucius after all. "Ah, whatcha gonna do, Ali? Turn me into a stinky human?"

He didn't have time to revel in his amusement since his knees suddenly folded beneath him and he crashed to the floor. He tried to speak but all he managed was a hoarse noise followed by a puff of feathers filling the air. He flailed at the sound of his own voice.

"Trying to say something, Luscious? I can't seem to make out your words through the mouthful of crow you're eating." Ali flipped back his multicolored, waist length hair, rested one hand on his hip and let out an ear-splitting cackle. "Or should I say mouthful of fowl?"

Lucius struggled to voice his anger.  A loud “bock” rolled out of his throat, startling him and making him tip over on his newly-formed pencil-thin legs. He fell back on his feathery butt. “Ba-gock!”

“Now, now. Don’t get yourself in a flap, love.” Ali chuckled at his own joke and at Lucius’ obvious expense, throwing his lithe body into one of the kitchen chairs. “It’s customary to have turkey for Yule dinner but if you continue to cross me, I have no problem making an exception this year.”

Lucius clucked once in what he hoped was a display of surrender. He was still pissed, but he was a wolf dammit, not some stupid chicken, and there was no way on earth he was staying that way. How dare Ali turn him into a lowly farm animal simply because he couldn’t handle the truth about his human lover? Humans were to be ridiculed, ignored and avoided, not invited into the home of supernatural beings with much higher intelligence and wit and, well, everything else.

And not only had Ali befriended and invited the commoner to their home, to what he always referred to as their most important family dinner, but he had been sleeping with him in the room right next to Lucius’. Ali had been subjecting the entire household to raucous barnyard noises and smells simply so he could get his rocks off. Lucius would be lying if he said the noises didn’t turn him on sometimes, when he pressed his ear against the wall, fingers twisting around his hard length while Ali enthusiastically hissed at his lover— on your knees, suck harder, ass in the air, I’m gonna come! Lucius had never actually met the man, only seen him when he snuck in at night and out again in the morning, and that alone told him that Ali had to be at least partially ashamed of his choice in species.

Why couldn’t he find someone of his own caliber to bed? Not a wolf of course, they were far too fussy to sleep with witches, but another witch or even one of those friendly vampires that ran the local after-dark beauty salon? Goddess knows Ali spent enough time there keeping himself beautiful. Last year, Ali had even canoodled the ugliest troll known to well… trolls, but his current human far exceeded even that disgusting display in smell and appearance.

“Even as a chicken, I can still hear your wheels spinning,” Ali said, rising from the chair where he’d been casually perched. “Would you like me to think of something even worse than fowl? Or are you going to give up this prejudice bullshit that you have against my lover and his kind?”

Lucius clucked and staggered his way across the floor, skidding to a stop at Ali’s feet. He pecked gently against Ali’s calf, through the long silky material of his robe, and clucked again. He wasn’t giving up, but Ali didn’t have to know that, now did he?

“What do you think would be worse than being a chicken, Luscious?” Balls! The bastard and his psychic hearing. “Perhaps Manny can think of something. He’s always ripe with creative ideas.”

Lucius backed away when Ali called out “Manny” and a scattering of feet scrambled down the hall. “Holy Christ on a cracker!” Lucius flinched at the voice, ducking his chicken head and moving closer to Ali. “Ali, do you know there’s a chicken in the kitchen? Do you want I should eat it and get it out of the way?”

Lucius gasped in a way only chickens could, more of a regurgitated burping sound than a real gasp, when he heard the crackle-crunch-pop of bones shifting into place and skin stretching followed by the low moan of pain that usually accompanied Manny’s shifting. He looked up, staring bug-eyed—well, chicken-eyed—into the glowing golden orbs of the mountain lion who growled as he stalked closer to Lucius.

“Ba-gock!” Lucius screamed. He flapped his wings to no avail and ran about the kitchen like an actual chicken with its head cut off. “Bock! Bock! Bock!” he continued to squawk, throwing his round, downy body behind Ali’s legs and cowering.

Manny continued to advance on the chicken, lowering his head as he ducked under the table before crawling under the chair, heading straight for the bird. Fear and anxiety rip through him, his body shuddering and shaking as the head got closer, big white teeth almost smiling as Manny closed the gap.

The mountain lion came nose to beak with Lucius who’d backed up as far as he could into the wall, his little chicken feet scratching madly against the hardwood floor. Lucius squeezed his eyes shut and prayed for a quick death, his entire life rushing past him in a totally cool Technicolor way. It occurred to him he’d never realized chickens could see color. He flinched when hot breath teased over his face before something wet scraped over his eyes… what the fuck?

Manny stopped licking and Lucius opened his eyes very slowly. For the love of the goddess, now he smelled like barnyard animal and stinky cat breath. Disgusting. He watched as a grinning-widely, man-Manny returned and the horrible feline disappeared but he was still apprehensive when he stepped out from behind Ali’s legs. He hoped like hell he hadn’t let loose a pile of chicken turds or even worse laid an egg when he’d nearly been frightened to death.

Someone was going to pay for his humiliation and he was already plotting some bad-ass revenge.
Posted by K-lee Klein at 11:43 AM