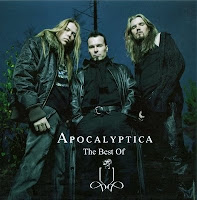 Apocalyptica is a Finnish band formed in 1993 when four classically trained cellists gathered to play Metallica covers at Sibelius Academy. Since then Apocalyptica (I really love their name) with its three members --Eicca Toppinen, Paavo Lotjonen, Perttu Kivilaakso and Mikko Siren (Jesus - try spelling those even while you're looking at them) --have sold over four million albums. Their music has been called everything from classical to neo-classical metal to thrash metal and even symphonic metal. I just call it and them very unique. 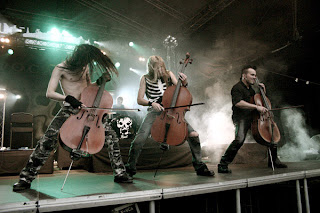 The first time I heard of the band was in fanfiction of all places and I immediately checked them out. The combination of hard-rocking music, beautiful long-haired (you gotta admit they're pretty hot) and kick-ass cellos suits me just fine. I love that they have guest-vocalists that fit perfectly into the dynamics of the band, that their videos are freaky awesome, that they wear guy-liner, and basically, I just think the whole band and their music is cool as hell. Check them out.
(they're coming to the University here but I don't wanna go alone - any takers?)


My fave song and video of theirs because it has the awesome (and Canadian)
Adam Gontier from Three Days Grace.

And Corey Taylor from Slipknot and Stone Sour

A live video to show you how they work it on stage.
(there are other live ones where they *ahem* are shirtless :P)


Different live version, only 3 cellos, a shirtless Perttuu and some tongue. Lol.