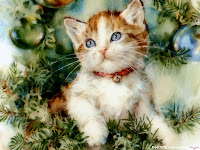 My guest today is the bubbly Missy Welsh who in real life is just that… bubbly. We met at Gay Rom Lit and I was enthralled with her wit and sarcasm and all-around adorableness. Missy has a new holiday release, Every Time a Bell Rings, from MLR Press coming out on December 23.

Welcome, Missy. I’ve missed your smile and our lunches. J  How is your Christmas shopping coming?

Hi, K-lee! :) I’ve missed you too! I’m actually finished with the Christmas shopping and went to wrap today only to discover that I have absolutely no Christmas wrapping paper! So now I have to shop for that.

I’ve been writing short stories since I was a kid--still have my first from when I was 12--but I don’t think I ever really thought “yep, I’m going to be a writer when I grow up.” I wrote for friends in high school, like putting them in their very own romances, and I wrote for me.
I got into M/M shortly after buying myself a Kindle in 2009 (happy birthday to me!) and my recommendations in there included “Heaven” by Jet Mykles. Gay men in a romance wasn’t so new to me, but erotic romance? Like with details? I was too curious to resist!

My very first exposure to gay characters in a romantic setting was thanks to Suzanne Brockmann and her FBI Agent Jules Cassidy. I’d been in love with her heroes for a good long while by then, discussing the books with my mom and sister like our own little book club. When Jules finally got his Robin as a subplot in one book, I was completely hooked. When they got their own book as leads, I was over the moon and just had to see if I could write a gay romance too. Nearly a year later, I finished it!

Staying on task. Write THIS book by the deadline, Missy, not five others
and don’t you dare go do any more “research”! I wander a bit sometimes.
It’s even harder to concentrate when looking for a job and dealing with the depression and worry from being jobless. When I can manage the whole
butt-in-chair thing and ignore the shiny-shiny internet (and all that
“research”!) I can get right into that world and make significant progress. It’s just not necessarily a daily occurrence.

Oh my first book will always be my baby! “My Summer of Wes” and Malcolm Small are very dear to me for a lot of reasons, like how alike me and Mal are and the fact that’s the first story I’ve ever had published. That book will forever make me cheer, “I’m somebody!” LOL!

5.     Tell us a little about your new release, Every Time a Bell Rings.  Is there some specific inspiration behind it? Will it be a stand-alone or do you have future plans for the characters?

Brian Bailey is my MC in “Every Time a Bell Rings” and my goal with him was to force him into a potentially very dark place and then bring him out of it. He’s lost his mother to cancer and was her caretaker through it all, he’s lost the majority of his friends because that just seems to happen when others can’t handle your problems, and now he’s lost his home and nearly all his possessions days before Christmas. Some people might head for the nearest bridge; Brian rebuilds even though it’s painful and he doesn’t really know what he’s doing.

But I’m completely unable to write something that doesn’t have a little bit of comedy in it, so have a tissue handy while being prepared to giggle a couple times. At least I hope I’m not the only one who thinks it’s funny!

I don’t have plans, per se, but I’d happily return to visit Brian and Trent while giving Brian’s best friend, Mike, his HEA.

There’s a window in the little room I write in that I have to shutter so I don’t daydream while staring out it. I write either in silence or with classical music playing really quietly--if I’m downstairs, I listen to the fish tank bubble--because I’ll sing along and forget what I’m doing. I’m also easily influenced by songs, so I end up getting an idea for something else instead of working on the project in front of me!
I am utterly unable to write in public places like coffee shops because I’m too easily distracted, though I can review or edit there. I have been known to completely ignore phone calls and write for 4-6 hours without a break or realizing I’ve done that until I have to pee. :)

You know, I thought I did, but I’ve discovered I kind of don’t. I couldn’t stand stories with cheating in them --> I have an outline for a couple coming back together after one cheats. I guess I’m willing to explore just about anything nowadays, even if I hate it at first glance.

I loved GRL! Even broke and unemployed, I got my butt to New Orleans because I just had to meet friends I’d made online, readers who wanted to actually meet ME (seriously?!), and get my fangirl on for some of my favorite authors--thankfully I was alone when I met a certain author and my IQ went down into negative numbers while I babbled all over her *ahem. And it wasn’t a goal, but from a business standpoint, I actually made some great contacts. I just went for friendship and to talk books with people who wouldn’t bat an eyelash about the gay part of it all--something I don’t get elsewhere.

And oh hells yeah I’ll be in Albuquerque! (I can even spell it now!)

9.     What can we expect next from you? Are you already working on something else?

Right now the project I’m trying to keep my tush in a seat to complete is a story about a gay college student who’s locked himself in the closet because he’s an athlete on scholarships but also because he cross-dresses too. He breaks my heart and I just have to give him his HEA or it’ll kill me…or my editor will kill me because she wants it too!
And though I’ve said it for a year now and people are probably going to roll their eyes and think “yeah right, chick!” I am actually working on the sequel to “My Summer of Wes.” Sweatagod.

Missy has graciously offered up an ebook copy of Every Time a Bell Rings (an IOU for release day actually) to one lucky commenter. PLEASE REMEMBER TO LEAVE YOUR NAME AND EMAIL ADDRESS IN YOUR COMMENT.

CONTEST WILL BE OPEN UNTIL TUESDAY, DECEMBER 20

Also, take a minute to check out Missy’s other fabulous books on her websiteMissy Welsh