Hey, look at that. I'm dusting off the blog after a really long time - too long actually. It's time to become more active and I'm starting with something I've wanted to do for a while - flash fiction.

I joined a group on Facebook, Monday Flash Fics, so I'm going to give this an actual try. The photo was actually my idea and it was originally posted on July 4th, making it kind of special. I'm really rusty when it comes to this stuff so I hope I do it justice.

The rules of the group are under 500 words but I cheated and ended up with 506. It's better than the 582 I had to begin with though. Here we go.

Shipping out—two simple words meaning so much to so many. Two simple words with opposing, yet important, meanings: pride and shame, love and hate, life and death. And Ryder experienced them all every time Mark had to ship out.

Pride was the simplest. Ryder was proud from the tips of his ears to the heels of his feet of the brave, patriotic, and strong man he intended to share the rest of his life with. And Mark deserved every ounce of pride Ryder felt.

Shame rolled around in the guilt that consumed Ryder during quiet moments of contemplation. It came when soldier-Mark was packing his duffle, making sure everything was ship-shape and up to code, on his way to make a difference in the world. Ryder's hockey career didn't exactly gain him any points for heroism, and though he was doing something he loved, it was hard to measure up to a man risking his life for his country.

Love was a given. He'd loved Mark since college, loved him in a way he fought and struggled against for too many months while Mark waited patiently for him to figure himself out. Love kept Ryder going when his world became suddenly smaller, when his family didn't quite accept what he was and whom he loved. Mark was there with gentle encouraging love when Ryder was afraid to come out to his teammates. And not just there metaphorically, he'd been at Ryder's side, one strong hand pressed to Ryder's back in silent support.

Love was Mark and Mark was love.

Hate was entwined with anger, fear and sadness. When Mark put on the uniform, when he became soldier-Mark, Ryder was ashamed to admit he hated it at first. He hated army green and camouflage, field caps and tucked-in pants, combat boots and shoulder patches—but never for long. It was always an initial response to Mark leaving. But in reality, Ryder knew the uniform was part of what Mark was…for now, so how could he possibly hate anything about it? 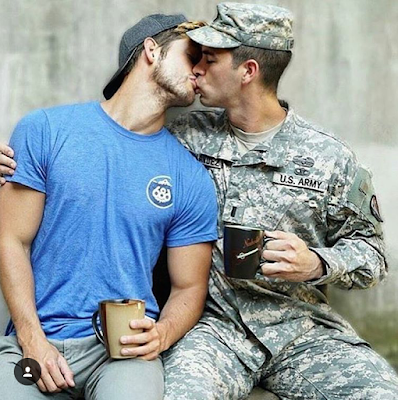 Life and death went hand-in-hand when someone you loved shipped out. Mark was Ryder's life, but the repercussions of him leaving were terrifying and all too real.

"Hey." Ryder turned to look at his partner, suddenly aware the hot coffee he'd been clutching was lukewarm and Mark was staring at him. "Where'd you go?"

He ducked his head. "We should get married."

"What…what did you say?" Mark slid an arm behind Ryder, wide grin blocking out the sun. "You got something stronger than java in that mug?"

Ryder's confidence soared when he finally met Mark's gaze. "I don't plan on getting down on one knee and I don't have a ring, but I'd really like to marry you when you get back."

A breath-stealing kiss seemingly sealed the deal. And the rib-breaking hug that followed was all the answer Ryder needed. Shipping out was still stressful but Ryder felt he'd made the right choice in all the right ways—pride, love, life, and Mark.
Posted by K-lee Klein at 7:34 AM