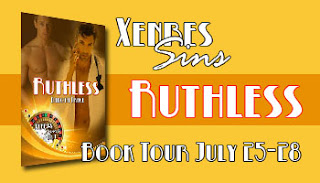 I'm pleased to announce I am the first stop on the lovely Dakota Trace's Xenres Sins book tour for her new release, Ruthless.

Please welcome Dakota and her um...friend...muse...other personality (lol), and make sure you enter the give-away at the bottom.
Enjoy.

“Wow, look at all this yummy man candy.  I have to say my slave has much better taste this time. She’s starting this tour out right.”   Flipping her dark hair over her shoulder, Livvy didn’t seem to notice the surprised stars.  Dressed in her normal corset and leggings, she wandered from picture to picture.  Finally she stopped.

“Okay, I can feel your eyes on me.  And while I love as much attention as the next muse, the staring is starting to creep me out.  I know that you usually get lots and lots of hunky men visiting this blog, but I have eyes…and as Dakota’s muse, I’m allowed to drool over the yummy pictures.”

*Peers at the pictures scattered around the room from the Hobbit*

“Okay, is it just my imagination or is K-Lee a bit obsessed with Fili and Kili from the Hobbit?”   Sighs.  “Well not that I can blame her. They are quite tempting.  Almost as tempting as Asha. Of course I may be partial.”

“Okay why are you looking at me like I’m insane?”  Props hand on hip.  “Oh…you don’t have a clue what I’m talking about do you?” 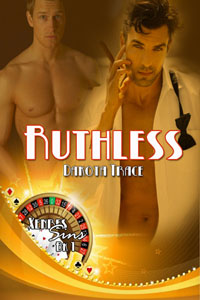 “Well if you were expecting something normal you came to the wrong place. I’m about as abnormal as they come. But allow me to introduce myself.  When I’m not drooling over smexy men, I play the role of Dakota Trace’s irrepressible muse.  Yep, you ever wonder where her ideas come from? That would be me.  And today I’ve been tasked with the pleasure of pimping out her newest book.  The first book in the Xenres Sins Series and believe me after my last couple of tours, I’m gonna toe the line.  My slave has a tendency to leave me at the mercy of her characters…and let’s just say…the vampyres from her new series…” *shudders* “…I wouldn’t want to meet them in a dark alley.  So I’ll behave….”

“…well as much as a muse of my nature can. “  *smiles* “So let’s get this show on the road.  While I haven’t been able to convince Asha and Eryk that they need some time apart yet, I did manage to convince Asha’s business partner, Kiarad to show up….well if he ever gets here.”  *glances pointedly at watch*  “And they say women are always running late…”

“I’m not running late, Muse. Your author’s directions leave a lot to be desired.”

“You made it!”  Livvy rushes to the tall, dark and deadly looking male.  “Allow me to introduce Kiarad Alzedah.  I like to call him Kia but Dakota has vetoed that idea.”  *scratches head*  “Evidently it reminds her too much of some car or something.”

“And I’m not a car.”  Kiarad crossed his arms over his chest.  “I’m a tired vamp who crossed several time zones to come and be here today.  Do you have any idea what time it is in Dushanbe right now?”
“Ummmm, late?”

“Yeah…and if it hadn’t been for Asha being so wrapped up in his new mate, I’m sure he’d be pissed that I took off on one of our busiest nights.”

“Aw, we’ll get to it, then. We don’t want to get on Asha’s bad side considering how ruthless he’s know to be.”

“So while Asha maybe Ruthless, Mr. Alzedah here has his own trait which will be exploited soon in his own book…”

“Muse….” A low warning grow spilled from his chest.

*places hand on hip* “Aw….poor baby….as I was saying….Kiarad here has his own trait which my slave will be exploiting.

So to be entered for a chance to win: Answer the question below (the answer will be in the small excerpt)

Question: What trait is Kiarad known for? 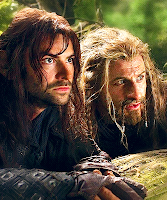 Place your answer in the Rafflecopter form to be entered to win one of two copies of the book that my slave is giving away.  Dakota will be announcing the winner on her blog on Sunday.”  *thoughtfully taps chin. “Oh and don’t forget to stop by the Wicked Muse Tavern tomorrow. I do believe Asha will be there…or so my slave tells me.  Thanks again to Ms. K-Lee for having me.  Hopefully I wasn’t too much trouble this time.”


**No trouble at all. Thanks for dropping by. It was very…interesting…um, nice...to meet you. Give Dakota a hug for me—oh, and for the record, I'm not sure who these Fili and Kili "people" are that you say I'm obsessed with. *shrugs* *pokes blond dwarf who in turn pokes brunet dwarf* Nope, not a clue. ;) Good luck with your new release. :D

Welcome to Xenres. Located in the heart of Dushanbe, a person can indulge in any sin imaginable, which is exactly what Eryk Solie has set out to do. As a lone Arctic wolf shifter in a foreign country, he longs for something more than mindless one night stands with men who could never completely understand him. Intuition and a tip from a local leads him to Xenres. Inside the notorious gambling hall, he finds his mate, one of the owners of the club. Too bad the man is considered to be one of the most ruthless vampyres in the district. To win a night in his mate’s arms, Eryk will have to lose at a game of chance.

Asha Talavi not only co-owns the darkest gambling haunt in town, he’s also a self-made vampyre. His ruthless nature has gotten him everything he’s ever wanted including the sexy wolf shifter who dared to accept his challenge over a hand of cards. But even after Asha claims his mate, there is treachery a foot in the form of a former lover. And when Eryk returns the following evening, he tracks down his mate to only find the man with another, claiming he doesn't remember him, or their wager and mating. Only an ancient ritual will tell if Eryk's love will be a match for Asha's ruthlessness and which shifter will in the end claim Asha.

Sitting at his normal table, Asha Talavi studied the crowd. On the far side of the club a live band played western music, while female vampyre waitresses dressed in tight black skirts and low cut blouses glided through the tables. They not only flirted with the gamblers, but served strong Russian beer and liquors to the patrons. A good combination Asha had found. Offer lots of liquor and hot women and most men became drooling dogs, who didn’t pay the slightest bit of attention to the cards in their hands.

A loud cheer rose when in one corner of the room. It seemed the craps tables were heating up. Reminding himself to keep an eye on the payouts on them, he turned his attention to the keno and roulette tables in the center of the room. Only two tables were open, but were already beginning to attract some of the out-of-towners. He himself didn’t understand why the tourists gravitated to such games, but in the end, it paid out handsomely for the house.

A scrape of a chair next to him barely registered, but he knew from scent alone it had to be Kiarad, his business partner. Without looking over to verify the identity of his guest, he took a sip of the tumbler filled with blood-laced cognac. Like any of his kind, he felt blood went well with anything, including alcohol.

“It looks like it’s going to be another profitable night.” Kiarad shifted in his chair, the silk of his trousers rasping over the polished wood seat.

“Of course.” Leave it to his partner to look around and see nothing but money. But then again, Kiarad’s greed was well known. He couldn’t blame his partner. The other vampyre had lost much over the past few decades. It only made sense the man was greedy now, and hung on to everything as if his life depended on it. Which reminded him, he was going to have to talk to Aseem and Saeed to see if they’d heard from Xenres, who was supervising the maid service he’d sent over to Kiarad’s apartment. His friend was close to becoming a hoarder, and his living quarters were in a dire need of a good cleaning. Too bad the only time to do it was when the fool was at the club, and their sire was the only one strong enough to hide his presence from Kiarad.

“I can hear you thinking over there, Asha.” Kiarad tapped his fingers on the table. “What’s going on inside your decidedly thick head?”

a Rafflecopter giveaway
Posted by K-lee Klein at 6:42 AM